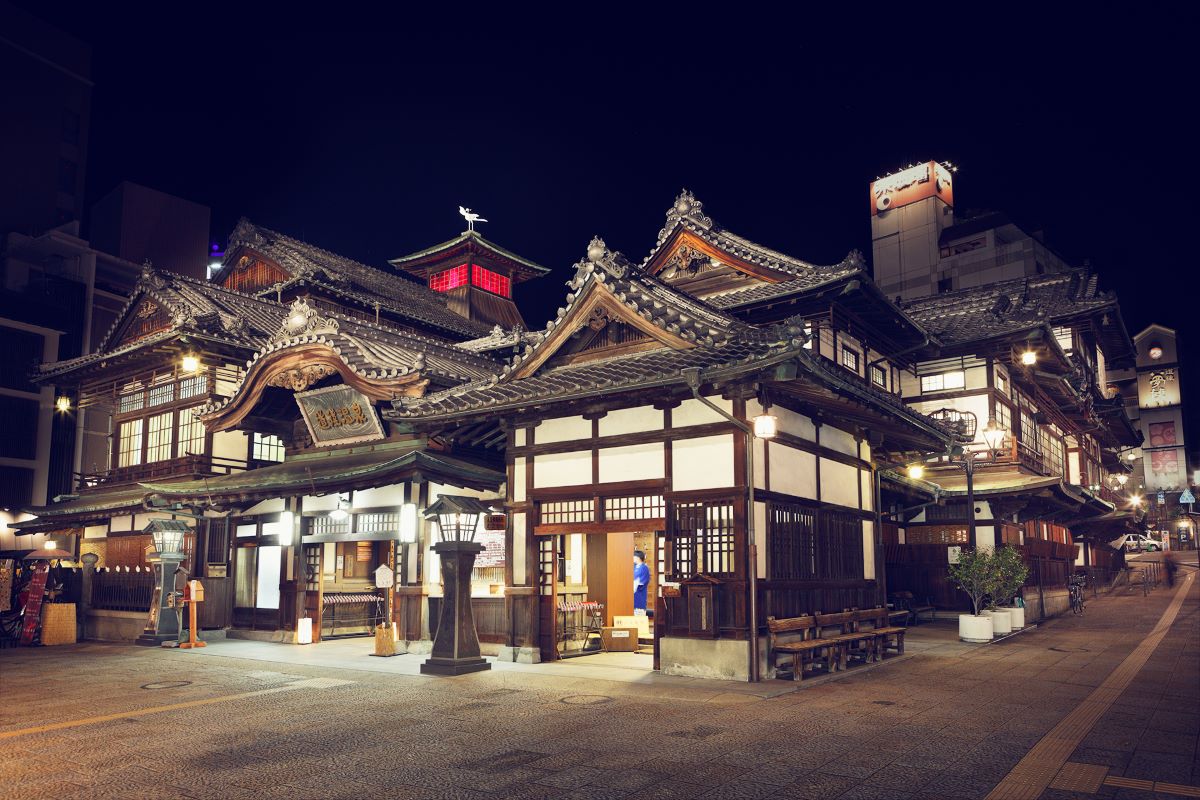 Matsuyama, Japan, the capital of Ehime Prefecture, is the largest city in Shikoku with a population of approximately 500,000. It is popular among travelers as a castle town full of charm.

The must-see attractions in Matsuyama are the Matsuyama Castle, Ishite Temple, and Dogo Onsen which are all world-class, but there is plenty of other things to see and do.

In this article, we will give you the ultimate list of the best things to do in Matsuyama, one of Japan’s best cities to visit.

In our opinion, the best things to do in Matsuyama is to visit the remarkable Matsuyama Castle. Rising up over central Matsuyama, the Castle is the symbol of the city.

Built on the 132-meter-high summit of Mt. Katsuyama, it is one of only 12 castles in Japan with an existing castle tower from the Edo Period.

The vast site is popular among tourists for its ropeway and single-seater lift services, as well as for its walking paths and trekking trails.

At night, the castle keep is beautifully illuminated with white light, offering a magnificent view.

You can take a cable car or a chairlift to the top or do it the old-fashioned way and hike up along one of the various paths leading up.

Matsuyama City is also the setting of Soseki Natsume’s novel “Botchan. There are many facilities and products related to Botchan and Madonna, and the symbolic “Botchan Train” is one of them.

If you want to be sure of getting on the train, please get a numbered ticket at Dogo Station. (During peak season, numbered tickets are also distributed at Matsuyama-shi Station.

Currently, there are two train routes in operation:

Clouds over the Hill Museum

The novel Kumo-No-Ue-No-Saka or Clouds over the Hill by Ryotaro Shiba depicts the modernization of Japan through the lives of the brothers Yoshiko and Masayuki Akiyama and Shiki Masaoka.

This museum exhibits the lives of the three main characters and many materials related to the novel. The four-story building with one basement floor was designed by Tadao Ando to represent “Clouds over the Hill.

The French-style Western-style house that is the pride of Japan and conveys the romanticism of the Taisho Era (1912-1926) is located at Kansuisuiso.

It was spared from the fires of war in the past and has become an important cultural property of Japan as a valuable building that retains the appearance of its original construction.

Both the exterior and interior are extremely beautiful, and the stained glass windows decorating the interior are a must-see.

In addition to the architecture itself, various events such as paintings, hanging scrolls, and traditional artworks are held here from time to time, making it a place that can be enjoyed in a variety of ways.

Pro Tip: There’s a relatively new coffee shop with a beautiful design and garden right next to Bansuiso which would make a great place for a timeout.

Dogo Onsen main building is said to have a history of 3,000 years and is a symbol of Dogo, one of the three oldest hot springs in Japan. It’s also the supposed favorite hot spring for the imperial family and they have a dedicated room just for them.

The three-story wooden building was constructed in 1894 and is a National Important Cultural Property, and was also depicted in Soseki Natsume’s “Botchan.

There are four bathing plans to choose from, allowing you to select the stay plan that best suits your needs.

A nice service that includes tea sweets when you take a rest in a hall or a private room is also available.

A new hot spring in Dogo opened in December 2017. The building, themed Dogo of the Ancient Times and built in the Asuka Period architectural style, is equipped with an open-air bath not found in the main Onsen building.

In the special bathroom, which is a reproduction of the imperial family’s private bathroom, visitors can experience bathing while wearing a yucho, an old-fashioned bathrobe.

The five private lounge rooms, each with traditional crafts depicting the legends associated with Dogo, are also worth a visit.

The “Botchan Karakuri Clock” in Houjouen, located in front of Dogo Station, was built in 1994 as part of a project to commemorate the 100th anniversary of the construction of the Dogo Onsen Main building.

The clock is based on the motif of the Dogo bathhouse, and every hour from 8am to 10 pm the clock tower rises to the accompaniment of a lively melody to reveal a character from Soseki Natsume’s coming-of-age classic novel Botchan.

Pro Tip: Next to the clock tower, there is a footbath using hot spring water from Dogo Hot Spring. The perfect place to wait for the big show.

Climb the 135 Steps to Isaniwa Shrine

The beautiful vermilion shrine pavilion will greet you as you ascend the 135 stone steps to the top of an endless stone staircase of the Isaniwa shrine.

From the top of the stone steps, you can look down on the picturesque townscape of Dogo. The stone steps are slippery, so it is recommended to wear comfortable shoes.

The building said to be one of only three in Japan built in the “Hachiman-zukuri” style, is designated as a national important cultural property.

Since it is located near Dogo Hot Spring, why not take a bath after to relieve the fatigue of all those stairs?

Ishiteji Temple is associated with Emonsaburo, who is said to have started the Shikoku pilgrimage, and is one of the 88 sacred temples in Shikoku at number 51 on the list.

The temple has many historical attractions and great places to check out, including the Niomon Gate, a national treasure built in the Kamakura period (1185-1333), the main hall, the three-story pagoda, and many other interesting parts in the inner temple grounds.

Pro Tip: Don’t forget to check out the secret Mantra Cave and the rear temple section just over the road.

The temple is famous for its specialty, yakimochi, and there are several stores within the Ishite Temple grounds where visitors can take a break while eating yakimochi.

Located about 1 km from Dogo Onsen, the temple attracts the most worshippers in the whole Prefecture during the New Year.

Dogo park is famous for its cherry blossom viewing in early spring but it’s a great place that can be enjoyed by locals and visitors alike year-round.

Benches are placed throughout the park, and it’s a great place for a stroll after a hot spring.

There are also the ruins of Yuzuki Castle, The Shiki Museum, and recreated samurai houses where you can learn about the history of the area.

From the observatory on top of a small hill, you can enjoy a 360-degree view of Matsuyama City, including Matsuyama Castle.

A stream flows through the park, the surface of the water is covered with water lilies leaves, and cherry blossoms flower in abundance in the springtime.

Just like in Hiroshima, In Matuyama, the streetcars are a convenient means of transportation for sightseeing, with a total of five lines, including a loop line that circles the center of the city.

The fare is a flat rate of 160 yen (80 yen for children), regardless of the section of the train ride, and the fare is simply put into the fare box located right next to the driver’s seat when getting off the train.

The trams run frequently and pass through areas frequented by tourists, such as JR Matsuyama Station, Daimaido, and Dogo, making it a highly valuable service.

Note: The distinctive orange color of the trams are from the Mikan citrus fruits that the surrounding rural areas are famous for.

Pro Tip: The City Train Free Ticket allows unlimited rides on all city trains and is highly recommended for those who plan to take multiple trains.

Matsuyama Park is a great place to enjoy the abundant nature and is another activity on our list of best things to do in Matuyama that offers a great view.

At the top of the mountain is an observatory reminiscent of a European castle, from which visitors can enjoy a panoramic view of the town of Matsuyama, the Seto Inland Sea, and surrounding rural areas.

The park also has playground equipment for children, making it a great spot for families with children. The vast lawn, trees, and other natural features make it a great place to have a picnic lunch.

The next thing to do in Matsuyama is to take a ride on Kururin, a large Ferris wheel with an eye-catching appearance on top of a building in the city center.

There are 32 gondolas in total, and only two of them are see-through gondolas with all-glass floors. It may be a little scary, but it is quite exciting to be able to enjoy the view from all directions at the highest point, 85 meters above the ground. It is sure to be a memorable experience.

It is recommended to ride the Ferris wheel during the daytime for a panoramic view of Matsuyama City, including Matsuyama Castle on top of the mountain, or to ride it at night for a relaxing night view after a day of sightseeing in Matsuyama City.

It is located on the roof of the Yotetsu Takashimaya Department Store on Okaido Shopping Street, just a short walk from Matsuyama city Station.

The Imabari Towel Museum Ichihiro is one of the few towel museums in the world. It’s located about an hour by train from Matsuyama station in Imabari City, which accounts for about 60% of domestic towel production and is the largest towel production area in Japan.

The museum displays the manufacturing process of towels and many other towel artworks and has a well-stocked towel collection store, a restaurant, a café, and a European garden.

In the gallery, various artworks and other exhibits are on permanent display and are quite spectacular. In addition to these, there are also special exhibitions for limited periods of time, allowing visitors to enjoy them with a fresh spirit all year round.

More Things To Do In Matsuyama Ehime

More from this author