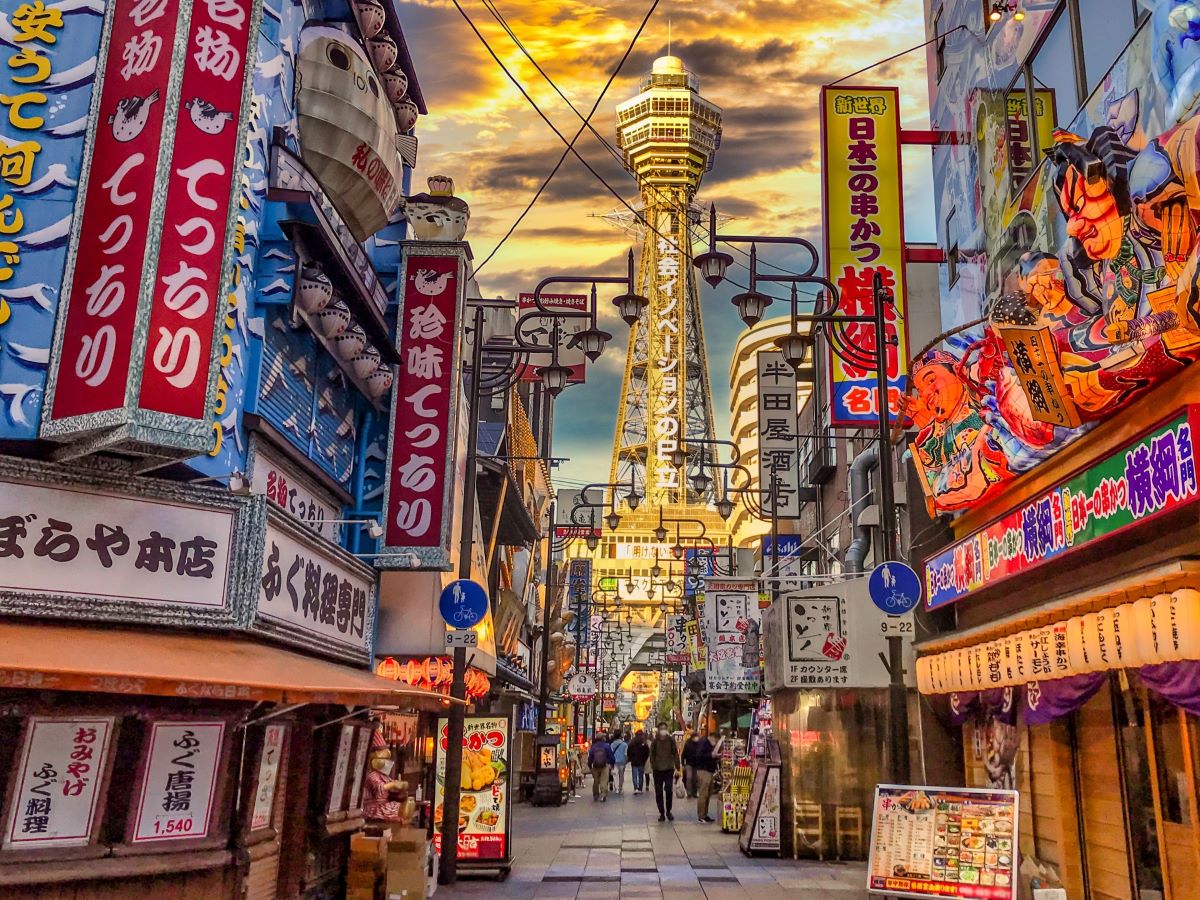 Osaka, Japan is known as a city of comedy and fun and it has many attractions such as gourmet foods like takoyaki and kushiyaki, shopping at Abeno Harukas, sightseeing spots like Osaka Castle, and the huge Universal Studios Japan.

With its bustle and insistence on not taking itself too seriously, Osaka couldn’t be more different from Kyoto just 50 km upstream.

Here we give you our ultimate list of the best things to do in Osaka, Japan.

The imposing Osaka Castle is one of the three most famous castles in Japan along with Edo Castle and Nagoya Castle.

The castle was built by Hideyoshi Toyotomi, but it was destroyed during the Osaka Summer Campaign siege in 1615 and rebuilt in 1620 by the order of Hidetada Tokugawa over a period of 10 years.

The current castle tower was restored in 1931, but the turrets and gates remain as they were in the Edo period. At night, the castle is illuminated, and it appears bewitchingly in the darkness.

Also recommended while visiting Osaka Castle Park is the golden-colored Boat, which takes visitors on a tour of the huge moat.

The scenery changes with the seasons, and you can get a close-up look at the stonewalls of Osaka Castle while learning about the castle’s history through the historical commentary that is played on board.

The magnificently imposing Umeda Sky Building was selected as one of the Top 20 Buildings in the World along with the Parthenon and the Taj Mahal.

The arch-like building has a unique structure with an open space in the middle, and its outer wall is almost entirely made of glass. The color of the sky reflected in the glass is a beauty worthy of the Sky Building’s name.

From the wonderful Floating Garden observation deck, you can enjoy a spectacular view of Abeno Harukas, the tallest skyscraper in Japan, Universal Studios Japan, and the Akashi Kaikyo Bridge.

The view has been selected as one of the 100 Best Night Views in Japan and is recommended as a romantic date spot or as a great way to kick off a night on the town.

There are many neon lights and billboards, including the iconic Glico running man sign at the foot of Ebisu Bridge, a giant crab sign for Kani Doraku, a three-dimensional sign for Zuboraya’s giant blowfish, and many more.

The Glico sign is in its sixth generation and uses 140,000 LED lights. It is customary for Japanese visitors in the area to take a photo with the sign in the background.

The Dotonbori area is well known for its collection of Osaka’s best food, especially takoyaki octopus dumplings, and people line up in front of the famous restaurants to enjoy the iconic Osakan street food.

Aiming to revitalize Osaka as a city of water, a promenade called Tombori River Walk has been constructed along both banks of the Dotonbori River, and visitors can enjoy a 600-meter stroll from Nihonbashi to Ebisubashi and Minatomachi sections.

Also popular is the 20-minute Tombori River Cruise that takes passengers from Nihonbashi to Ukiniwa Bridge via Ebisu Bridge.

The bustling Kuromon Market is also called the kitchen of Osaka with vibrant stores lining both sides of the arcade.

The Market is best known for its seafood, much of which you can buy and have cooked right in front of the store.

The fashionable Amerikan mura or American Village is an area that is also known as the Harajuku of the west.

Plenty of vintage clothing stores, record stores, bars, and clubs are packed into its narrow streets, and it’s always crowded with young people.

From exciting attractions themed on Hollywood blockbusters to shows featuring popular characters, this theme park is a place where children and adults alike can enjoy a great day out.

The expansive Universal Studios Theme park consists of nine major areas, including the Wizarding World of Harry Potter, an area that faithfully recreates the universe of Harry Potter, and the popular Minion Park where you can meet the Minions in person.

Super Nintendo World, which opened in March 2021, al also sure to be one of the most popular areas at USJ. The area is themed around Nintendo games, including the Mario series, and features attractions, merchandise stores, restaurants, and more.

This unmissable amusement park is located in the Osaka Bay area about 30 minutes from Namba Station.

The Awesomely retro Tsutenkaku is an observation tower in the heart of the Shinsekai neighborhood.

Loosely inspired by the Eiffel Tower Tsutenkaku is 103 meters high and was designed by Tanaka Naito, who also designed the Nagoya TV Tower and the Tokyo Tower.

Tsutenkaku Tower, widely known as the symbol of Osaka, was built in 1912. The current Tsutenkaku Tower is the second generation and has an observatory on the fifth floor that offers a panoramic view of Osaka.

It is said that if you pat the sole of the foot of the tower’s icon named Billiken, you will get good luck.

The wonderful Spa World is near Tsutenkaku Tower and offers beauty, health, and leisure-related facilities such as hot springs, saunas, swimming pools, and a  gym.

The hot springs are divided into two zones, the European Zone and the Asian Zone, with 16 different types of baths inspired by scenes from 11 countries around the world.

There are also indoor pools with a slide one with a slider and a bath zone called Baden-Baden which is inspired by a luxury resort in Germany, and a family bath overlooking Tsutenkaku Tower.

Shitennoji Temple is said to have been built 1,400 years ago by Prince Shotoku, who won the legendary battle between Mononobe Moriya and Soga Umako, to worship the Four Heavenly Kings.

Within the grounds of Shitennoji Temple which was Japan’s first Buddhist Temple, there is Taishiden Hall, where Prince Shotoku is enshrined, Kamei Fudo Hall, and a Japanese garden called Gokuraku Jodo no Niwa.

Every year on April 22, the Tennoji Bugaku is performed at the Seireikai Bugaku Grand Buddhist Service held in memory of Prince Shotoku.

The main deity is the three-faced Daikokuten (Daikokuten, Benzaiten, and Bishamonten). It is believed that worshippers who visit Daikokudo during the monthly Daikokuten Festival will be blessed with prosperous business and offspring.

The breathtaking Harukas 300 observation deck at Abeno Harukas is currently one of the most popular things to do in Osaka. At 300 meters, it is the tallest building in Japan today.

The view is so impressive that if the weather and other conditions are right, you can see the entire Kansai region, including Kyoto, Rokko, Awaji Island, the Ikoma mountain range, and Kansai International Airport.

Abeno Harukas also has a wide range of museums and restaurants, including the largest restaurant district in Japan with 44 restaurants. There are also numerous brand-name stores, so there is no shortage of shopping opportunities.

The oasis-like Namba Parks is a popular shopping and dining destination that opened in 2003 on the former site of the Osaka Baseball Stadium.

Parks Garden, built on terraces from the ground floor to the ninth floor of the building, symbolizes the concept of Namba Parks as an urban development filled with greenery, water, and light.

The dazzling rooftop park is approximately 10,000 square meters in size, with 70,000 plants of about 300 species creating various gardens, a stream running through it, and seasonal birds and insects naturally gathering here. It is truly an urban oasis of lush greenery.

Specialty stores, including cafes and restaurants, are built around the gardens and there’s also a 200-seat outdoor amphitheater, surrounded by the lush greenery of Parks Garden, where fun performances are held on weekends.

The fun and educational Osaka Science Museum has 200 hands-on exhibits and science shows on the themes of space and energy.

The hi-tech planetarium features one of the world’s largest dome screens with a diameter of 26.5 meters and a state-of-the-art system that projects high-precision digital images from six projectors onto the entire sky.

The Milky Way and its 350,000 stars can be viewed allowing visitors to enjoy a starry sky that is as close to the real thing as possible.

The National Museum Of Art Osaka

Just next to the science museum in Nakanoshima the National Museum Of Art opened in the spring of 2022, 40 years after its conception was announced in 1983.

The museum has a collection of over 6,000 works of art and holds exhibitions and a variety of events.

This expansive park was built on the site of the 1970 Osaka Expo, and its symbol is the Tower of the Sun, a work by famous Japanese artist  Taro Okamoto.

The park includes a wonderful Japanese garden, another nature garden, and areas where visitors can enjoy nature, as well as cultural and sports facilities.

The spectacular Osaka aquarium known as Kaiyukan over in the portside Minato ward is one of the world’s largest aquariums and the second most popular aquarium in Japan.

You can encounter some 620 species of marine life, but the majestic whale sharks are the main drawcard and particularly popular because they are a rare species.

Other attractions at Kaiyukan include 14 giant tanks, including the Pacific Ocean Tank where whale sharks swim, the Fish Passage Aqua tunnel that makes you feel like you are walking underwater, and the New Sensory Area where you can see creatures from a close distance.

Familiarly known in the Kansai region simply as Sumiyosan, the famous Sumiyoshi Taisha is a historic shrine with a history of approximately 1,800 years.

It is the head shrine of about 2,300 Sumiyoshi-jinja shrines in Japan, and as many as 2 million people visit the shrine every year for the Hatsumode in the new year.

As soon as you enter the fascinating shrine, you will see a large Soribashi Bridge, which is said to be the symbol of the Sumiyoshi Taisha Shrine.

It is also called Taiko-Bashi or the drum bridge. The angle of the bridge is quite steep and makes a dramatic impact.

Fun for both adults and children, at the unique and educational Instant Ramen Museum you can make your own original cup noodle or even try your hand at making Chicken Ramen.

Momofuku Ando invented the basis for the wide variety of instant ramen sold in the world today and this fascinating museum is filled with his achievements.

At the Osaka Museum of History, visitors can experience Osaka in the Edo period (1603-1868) and enjoy a variety of items from the museum collection dating from the 1800s to the 1950s.

This is the perfect place to experience Japanese culture and history with faithfully recreated traditional streets from the Meiji, Taisho, and Showa eras.

You can even dress up in kimonos and enjoy the exhibitions that are lit up during the day and at night.

The Museum is located next to Osaka jo Castle Park in Kita Ward.

The picturesque Mino Falls was selected as one of the 100 best waterfalls in Japan and is especially popular during the autumn foliage season when you can view the stunning collaboration of the beautiful autumn leaves and the dynamic waterfall.

If you have time to spare, you can also visit the beautiful Katsuo-Ji Temple which is nearby. You can see several red daruma dolls lined up in a row, which are a popular photo spot, and you can also try the unique Maple leaf tempura.

More Things To Do In Osaka

Osaka city has an endless list of things to do and see. Here are even more ideas of the best things to do in Osaka, Japan when you visit this unique and exciting destination.

More from this author

Best Things To Do In Matsuyama: Castles, Hot Springs & Haiku